In Linux, there is a way to use the output from the execution of one command as input to another command, which is "|" (pipe) command. The word "pipe" here means that all incoming input to the pipe is not removed or sent elsewhere, but is passed to the exit as it is entered without loss of content.

Normally, when a command is executed, it receives input data from an explicitly specified file or input device, processes it in the manner specified by the command, and sends the result to the output.

When you use the pipe function, it sends the result of the previous command to the input of the next command instead of sending it to the normal output such as displaying it on the screen. 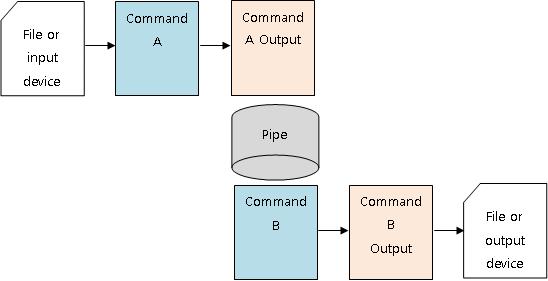 In order to use this command, the two commands are sequentially arranged and processed in the following format.

■   The result of the previous command is used as the input of the next command.

Here, we wll use the example to retrieve the contents of a large file. First, let's look at the file's data with the "cat" command.

This time, we will connect this command with the "less" command.

Then, the following screen is displayed, where users can navigate foreward/backward through the data in a way that is generally available in the "less" command.