LED (Light-emitting diode) is widely used as a oupput device for determining whether electricity flows through a specific line when constructing an electronic circuit. LED lights up when the voltage is applied, so it can indicate whether the specific GPIO port of the Raspberry Pi is high or low, and can determine if electricity flows on a certain line of the circuit. The GPIO port of Raspberry PI does not provide high power enough to drive high-brightness LED, so buy low-power LED (typical LED) when purchasing LED.

The following is a LED part picture and a description of LED basic structure. Long leg is (+) and short leg is (-).

Below is an example of constructing a circuit by using LED. The yellow wire connects the long leg (+) of LED to GPIO 1 pin that supplies 3.3V power, and the blue wire connects the short leg (-) of LED through a resistor to GPIO 3 pin, which functions as a GND.

LEDs will burn out if excessive currents or voltages are applied, so it is required to limit current and voltage using appropriate resistor. The maximum voltage and current that is normally used in LED is as follows. Outside this range, LED will be damaged. The data below shows that according to the color, allowable current is same and the longer the wave length is, that is, the closer to the red color of visible light it is, the less the permissible voltage is.

The position for installing the resistor for protecting a LED is normally set on the (+) side based on the LED, but the same effect can be obtained and there is no problem even if the LED is installed on the (-) side. In other words, either left or right in the figure below has the same effect. 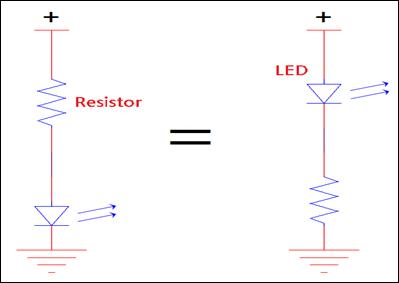