Here we will try to implement an example of connecting a LED to Raspberry Pi and blinking the LED using a program.

When making the circuit, connect a LED, a resistor, and Raspberry Pi using a breadboard as shown below.

First, install a LED so that both legs are on separate rows on a breadboard. Then connect the LED to the GPIO connector of Raspberry Pi as shown below. Connect the LED long leg (+) to the physical number pin 11 (pin 0 on the wiringPi) and the LED short leg (-) to the physical number pin 6 (ground). We use the most common 5mm diameter LED for LED used in the circuit, and use 330Ω for the resistance. 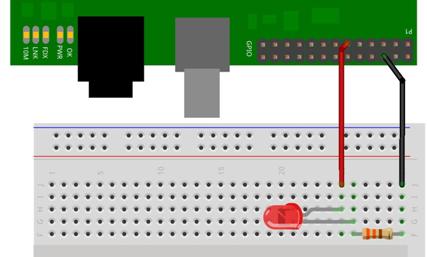 Here is a program using <WiringPi> library that shows a GPIO interface that blinks LED connected to Raspberry Pi. The program is written in C language here.

Write the following program and save it in "ledtest.c" file.

■    This includes "wiringPi.h" header to use <WiringPi> library function in the program.

■    This initialize GPIO with "wiringPiSetup( )" function.

Compile the written program to create an executable file. When compiling, specify <wiringPi> library as below so that compiler can refer to <WiringPi> library.

Execute the executable file created by compiling as below to check that it works properly. If everything goes well, the LED will blink once per second.

Here is a program using <RPi.GPIO> library that shows a GPIO interface that blinks LEDs connected to Raspberry Pi. The program is written in Python 3 language.

First, start Python 3 IDLE, write a simple Python program as follows, and save it in "ledtest.py".

■    This imports "RPi.GPIO" to enable <RPi.GPIO> library function in the program.

■    This imports "time" to handle time related processing in the program.

■    This sets the pin numbering system to BOARD system with "setmode( )" function.

■    This receives the number of LED blinks with "raw_input( )" function.

■    When all processing is complete, this resets the GPIO state to the initial state with "cleanup( )" function.

Execute the program as follows with "sudo" command on Terminal screen. You will then enter the number of times the LED blinks, and then the LED will blink at a periodic interval.