When you start the Desktop window on the Raspberry Pi system, the window shown below will start. 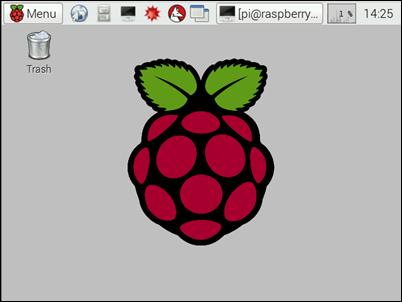 There are several ways to start a window from the console. You can start the window from booting, or logon to the Shell Terminal when booting and then manually start the window. For details on the settings, refer to [9.5 Setting Boot Startup Screen].

You may need a command Terminal to execute a command on the Desktop window screen. At this time, you can run the LXTerminal program provided by LXDE (Lightweight Desktop Environment).

To run this program, click the LXTerminal icon in the Task Bar or run the specific program in Menu → Accessories → Terminal. Then a Terminal appears to execute the command as shown below. From this Terminal, you can execute all commands for the system.