[Shutdown] menu provides the ability to shut down the system, reboot the sysem, logout from the current user account and change to a new user.

When you press [Shutdown] in [Menu], the popup screen as follows appears. When the user selects a desired item, the corresponding operation is executed. 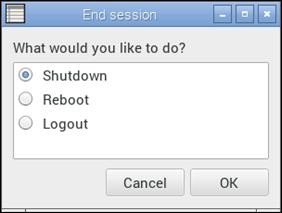 If you execute this command, the basic effect is the same as [Shutdown] in the sense that the current system is shut down. However, there is the feature that the system is completely shut down and then re-booted, and the system returns to the same state as when it first started.

When this command is executed, all the operations of the current user are completed, and the user ends the connection on the system. The effect of this interruption affects the only one specific user to logout and not to any other users at all. As a result, other users can continue working without interruption.