[Run] menu provides the ability to direct commands to the system without using the menu in the window, clicking the icon, or using the Shell Terminal screen.

When you execute this menu, a pop-up screen will appear, allowing you to enter commands on the screen as shown below. Here, when the user inputs a desired command to be processed and presses the [OK] button, the command is executed.

This program basically runs in the background based on the Shell Terminal. There it has a feature that various messages and data displayed on the screen are not retrieved during the processing of the command. For example, if you run "ifconfig" command to query the current IP address, the Shell Terminal will show the current IP address information, but it looks like there is no response here.

Keep in mind that even if it does not seem to have any response, it is not that it is not running, but only the processing or result will not appear on the screen. It is also important to understand that if an error occurs in the processing of a command, it does not provide any information about the processing, and it is not easy to verify that the command was executed correctly.

In the example below, let's create a folder on the desktop using the command "mkdir". The path to the "Pi" user's desktop is "/home/pi/Desktop". If you enter the command as shown on the screen and execute it, you can see that "RunTest" folder is created on the desktop. 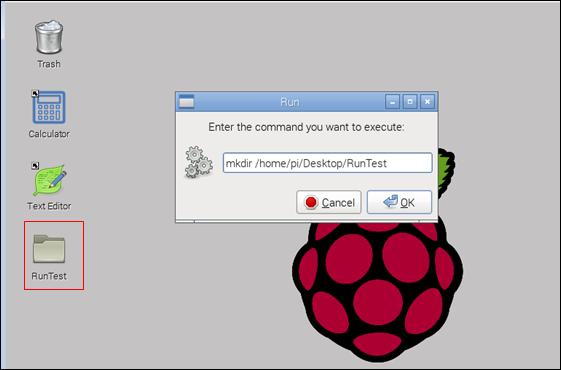